This article was originally published by Richmond Pulse on August 13, 2021. It has been re-posted here in its entirety with permission. 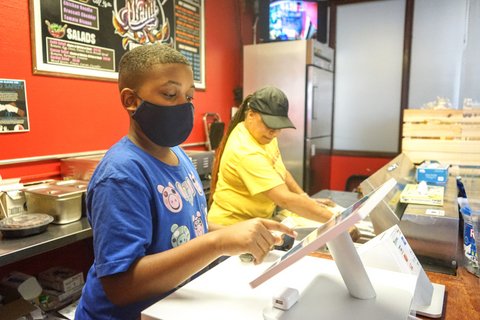 Davion Scott Foster, 10, helps out at the register at the NewLife Cafe as chef Mia Poole prepares a sandwich.

August 13, 2021 | Story and photos by Denis Perez-Bravo for Richmond Pulse

Every item bought at the NewLife Cafe in Richmond funds the hopes and ambitions of young people.

The revenue from the cafe funds not only itself but also the resource center that NewLife Movement operates on the second floor of the mall.

“It is all connected,” NewLife Movement founder Bendrick Foster said.

All of it — the cafe to feed the community, the resource center to provide assistance and a place to study and, in the near future, a technology center to aid the youth in their business endeavors — is the NewLife Movement.

When Foster began volunteering at Kennedy High School in 2014, he had no thoughts of a cafe or resource and technology centers.

Those days were about the safe passages initiative where NewLife Movement volunteers would walk through JFK Park to clean up drug paraphernalia. The team would also talk to students who ditched school in an attempt to convince them to return to class.

And if they saw anyone drinking or using drugs in the park, they would confront them.

“We would have to go toe to toe with them and tell them to leave,” said NewLife Movement volunteer Larnel Wolfe, 55.

Eventually, the older people drinking or using drugs in the park got the idea and would leave on their own, but Wolfe said, getting to that point was the hardest thing back then.

But that direct action was central to the program.

“We live by the conflict resolution model so that the kids can make better decisions,” Wolfe said.

Getting to a point where kids are safe enough to resolve their conflicts is the first step. For many years, that work happened at JFK Park. Now, the model flourishes inside Market Square Mall as NewLife Movement plants roots in the two-story building. 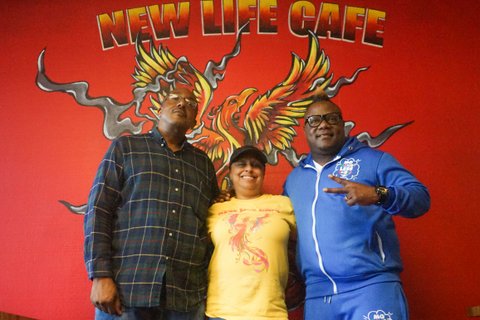 The first NewLife Movement entry point the public might experience is the NewLife Cafe.

Its entrance at Macdonald Avenue and 11th Street radiates bright colors as the organization’s logo, a phoenix, is displayed inside and out.

Behind the counter, you might find chef Mia Poole grilling vegetables or toasting bread as she prepares one of the cafe’s specialty sandwiches.

Alongside her you might see a young person helping out and taking orders.

“We give youth an opportunity to work, learn customer service, the [point-of-sale] system and how to make sandwiches,” Poole said.

Young people who participate in other NewLife programs are hired for a couple hours each week to help out in the cafe. Poole said the kids are rotated so that many get the chance to experience working at the cafe.

Even if culinary arts is not something they would be interested in in the future, the experience will help them in later jobs or careers, Poole said.

“Working at the cafe gives them a base of knowledge of work ethics,” she said.

One kid who helps Poole out in the cafe is 10-year-old Davion Scott Foster, Bendrick’s son.

“He has caught on fast,” she said. “He is good at visual learning.”

As Davion finishes taking an order, he makes an error in the amount of change he gave back to a customer. Then, he refocuses, asks Poole for help and gives the correct change.

In the back of his mind, Davion said, he knows if he keeps learning the ropes, one day, he just might take charge.

“I feel like I will be running [NewLife Movement] in the future,” Davion said.

His confident remark exemplifies the values the resource center hopes to give kids like him.

There is a certain quality you find in a library or office you can’t get working from home.

“When I come here, I feel energy,” Davion said in the resource center.

When he uses the center, he said, the people around him seem happy and are learning. And not only are they learning, but more important, they want to learn.

“I am proud to be a part of this,” Davion said.

At the resource center, kids have access to counseling services, tutoring and job opportunities. The space, created in 2019, also offers free Wi-Fi and can be used as a study hall or gathering place. 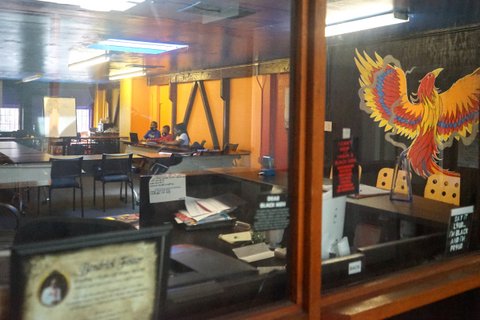 “We had around 300 caseloads,” Bendrick Foster said.

Following data provided by the school district that identified at-risk children who were not attending Zoom classes, Foster and other NewLife members went into Richmond neighborhoods, knocking on doors and seeing if the families needed hot spots, computers or other resources.

“It kept me involved with the parents and the students,” Foster said.

At times, Foster would meet kids who weren’t attending classes because their parents or guardians were sick with COVID-19. Worse were the cases where a student’s parent had died because of COVID-19 but the child was left grieving at home without any support from the school or the district, Foster said.

As virtual learning continued, the resource center became more useful for youth to work in.

Texas Southern University freshman Chanara Murphy was a senior at El Cerrito High School in the 2020-21 school year when Foster knocked at her door.

Murphy was not attending Zoom classes, but she wasn’t just ditching. In fact, she had an agreement with her teacher about missing them and was on good terms to graduate.

When Murphy and her mother, Latosha Spruell, heard about NewLife Movement, they became interested in getting involved.

At El Cerrito’s library, Murphy had brought 80 girls together to talk about love, finances, hygiene and more, but at NewLife Movement, a smaller group talked about the difficulties of life under COVID-19 and what it takes to survive in a socially distanced world.

The girls Murphy once knew had changed, and at the NewLife Movement, a group of mature young women were able to support each other.

“We want hope, someone to believe in us, and resources,” Murphy said.

She hopes NewLife Movement will continue to give that to young people.

On June 1, Foster, the NewLife Movement founder, began renting space on the second floor of Market Square Mall. His team plans to purchase computers with creative software programs, direct-to-garment printers and furniture to get a technology center running by next year.

The space will be called NewLife Movement Side Hustle, Foster said.

“Kids can come create a logo. Then, we would teach them how to put the logo in a T-shirt,” Foster said. “The next step would be creating a website for them to sell their T-shirts. By creating a website, they could become business owners.”

William Zier, founder of Clean Point Energy, will help run the technology center and give youth the chance to get involved with the solar power industry.

That would be one of many industries represented in the technology center.

“We will bring guest appearances from larger local organizations from the tech and medical industries. We will also have other people that will come in and run website and graphic design programs,” Zier said.

Students will be able to learn professional tools like Photoshop, computer-aided design and computer coding languages. The equipment would attract creative patrons who could feed off each other as they work on projects alongside each other, he said.

As Foster walks the room set to become the Side Hustle center, he sees an opportunity for Richmond youth to learn a trade and possibly make a profit by their own means.

A lot of talented kids don’t discover their creative abilities because they don’t have access to equipment or education. Foster hopes the tech center will be a conduit of entrepreneurship for the youth.

“The mission is to help them start their own business,” Foster said.